Over time, NASCAR has taken its cars through various modifications for different reasons. The modifications have turned out to be unpleasant to some fans. Still, there are arguably several positives from it, especially from the engineering perspective. In this article, we take a look at some of the engineering ideas behind the designs of the stock car at NASCAR.

Aero Push on a Stock Car

It has become the main feature of NASCAR races. A stock car moving at a high speed cuts through pockets of air. The air moves over the top of the vehicle and gets a deflection as it passes over the spoiler on the rear deck. Any car trailing behind it immediately will continuously be running into the affected airspace. However, if the trailing vehicle tailgates at a certain distance, can benefit from the lead vehicle’s aerodynamic force. In other words, the air acts as if the two vehicles are one. The trailing car is thus sucked forward by the vacuum created by the lead vehicle. It lowers the effort of the trailing vehicle and its fuel consumption lowers as well. The two cars can hence move faster than either on its own in a phenomenon called drafting.

Sometimes we’ve seen at the Sonoma raceway, two cars are trying to draft each other, it goes very bad. A crash is the result. Often Auto Towing will have to tow these cars off the track so the race can continue. Drafting is dangerous, but if done right it can be very beneficial to the car being drafted.

Drafting can be utilized to be a powerful technique in NASCAR racing. On the other hand, it can also be a liability. The trailing vehicle experiences a reduced downforce on its front wheels lowering its handling and stability. Aero push thus forces the drivers to take well-calculated moves. The other disadvantage is that some drivers can piggyback on the lead vehicle to remain competitive. 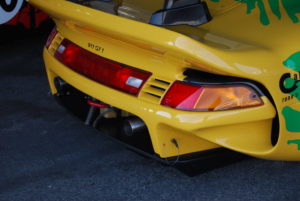 Air pressure produces a downward force that creates a greater pressure between the car tire and the road surface. A difference in pressure on either side of the moving car brings about aerodynamics. Reducing the pressure of air under the car increases the downward force. Increasing downforce increases the handling of the vehicle but lowers the car speed. In NASCAR, downforce is increased through manipulation of the race car bodies.

Downforce is a form of negative lift that applies to race cars. This means one has to overcome lift in order to build a race car with greater downforce. The goal of the engineers is to reduce the amount of air flowing below the chassis to increase the downforce. They also need to provide an easier way for the air that gets under the car to escape.  The cars are thus designed with a higher rear end compared to the front. In addition, the wings attached to cars in NASCAR races are fixed in an upside-down format to lower lift. NASCAR fans have raised complains about these modifications that have caused the racing to lose its appeal. They claim it makes drivers stay in single files rather than challenge each other more side by side. As seen, however, there are advantages behind these designs.

On another note, NASCAR seems to be going through some changes. Some of the reasons can be explored in our other article here.